Five years since the Maidan revolution and the annexation of Crimea by Russia, Ukraine continues to suffer. The situation in Ukraine has become bad enough that Volodymyr Zelensky, comedian by trade, won a landslide victory over incumbent president Petro Poroshenko with 73% of the vote in the presidential election of 21 April. In this piece, Eamon Driscoll examines the challenges that now lie ahead of Ukraine’s unusual new president.

For comparison of the current absurdity gripping Ukrainian politics, it is a mild equivalent of what might happen if Brexit became so bad that the Peter Capaldi’s Malcolm Tucker character was swept into the Commons. Now Zelensky, with no political experience whatsoever – aside from playing a fictional President of Ukraine on his comedy show – has been entrusted by the Ukrainian people with the unenviable task of reconstructing a country still enduring the Donbass insurgency. Before rushing to any judgments about Zelensky’s credentials (or lack thereof), it might be worthwhile to consider that his triumph may be more about kicking Poroshenko out of office than about getting Zelensky into it, though that is now a discussion for historians.

The exceptionally complex task now at hand has not been made easy. Immediately after Zelensky’s election, President Putin of Russia refused to call Zelensky to congratulate him on his election, as is customary between heads of government. Putin called into question the legitimacy of the election through Kremlin spokesperson Dmitry Peskov: “We respect the Ukrainian elections, more so that the verdict was very clear,” he said. “But the legitimacy of these elections is still under question given that 3.5 million people were unable to vote.” It is an unusual comment to make given that the 3.5 million people in question are living in the breakaway Donetsk and Lugansk People’s Republics, which are actively seeking to separate entirely from Ukraine. For context, international observers in Ukraine noted that these elections were the least problematic of all elections in Ukraine’s history.

The issue of the breakaway republics and the ongoing insurgency will be an immediate issue for Zelensky to confront. The task, overwhelming for anyone, is made more difficult given that Zelensky disregarded the breakaway republics, saying that they were merely Russian puppets and there was no sense in negotiating with them. If Zelensky does seek to end the conflict, he will have to speak with Putin himself. 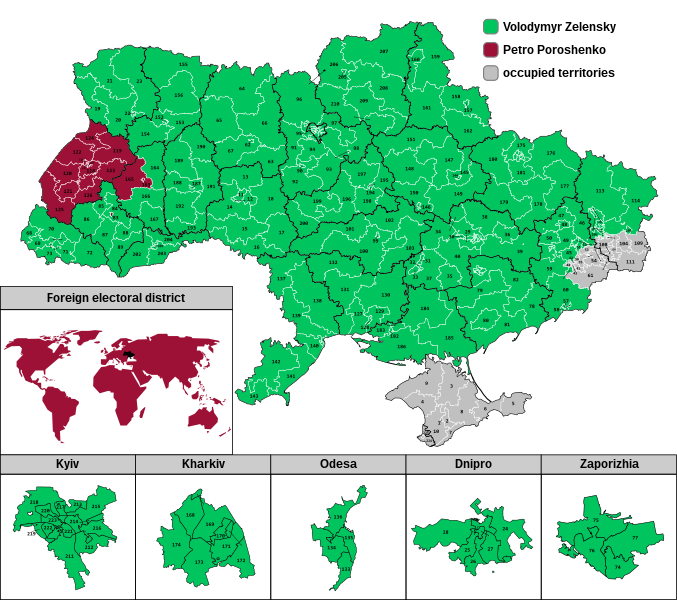 Fig 1.0 – Results by electoral district of the second round of the Ukrainian presidential election, 21 April 2019

While the conflict in the Donbass has disappeared from the world’s interest, the situation on the ground has reached a frustrating stalemate, and on the Thursday and Friday ahead of his 20th May inauguration, two developments made the task even more difficult. On Thursday 16 May, oligarch Ihor Kolomoisky returned to Ukraine from his self-imposed exile, while in Helsinki the Council of Europe decided on Friday 17 May that the time to bring Russia back into the fold had come. But it’s not all bad news for Zelensky, who will capitalize on his popularity to force change through the legislature as well.

One of Zelensky’s most attractive features is that he is not an oligarch. So far, he is the sole Ukrainian president who can boast such a claim, but there are still questions that have arisen about his connexions to the oligarch Kolomoisky, who owned the television station on which Zelensky’s comedy show was broadcast, as well as a bank that required a $5.6 million state bailout. The Poroshenko administration had accused Kolomoisky of stealing this money, and this case was highlighted among the many reasons of why Ukraine is considered a risky investment and an exceptionally corrupt country. Kolomoisky left Ukraine to avoid getting detained by the government over the case, but his return now calls into question whether or not he considers Zelensky a safe alternative in office. Fighting corruption was one of Zelensky’s platforms, but this recent development may compromise his efforts to do so if indeed there is any chance that Kolomoisky expects to be treated with a soft touch by the new government. The United States and European Union will be watching closely for any indication of “meet the new boss, same as the old boss”, which would likely limit their interests in helping Zelensky forge a new Ukraine.

In addition to the sensitivities around corruption, the Western world will be watching the military situation closely. The Council of Europe met in Helsinki on 17 May and voted overwhelmingly in favor of restoring Russia’s voting rights, which were suspended following the annexation of Crimea. France and Germany led the movement to restore Russia to its place, but Ukraine was one of the few members which opposed it, boycotting the meeting in protest. The move secures the access of Russians to the European Court of Human Rights, but also means that Russia will begin paying its dues to the Council, which had been suspended in June 2017. Russian dues covered 7% of the budget of the Council of Europe, and their suspension started a two-year countdown to either begin paying again or be expelled. But now Europe has brought Russia back, which has been interpreted as some as an admission that 7% of the budget is more important than who has sovereignty over Crimea. The translation for Ukraine is grim: Putin may no longer be incentivised to reach a negotiated peace in the Donbass, potentially crippling Zelensky’s bargaining position if he is ever able to sit down with Putin to negotiate. Regardless, negotiating peace in the Donbass is Zelensky’s primary political objective, and one which will make or break his presidency.

The bright spot for Zelensky comes in the Verkhovna Rada; Ukraine’s Parliament. On Friday 17 May, the Bloc Poroshenko government collapsed as the People’s Front – a smaller party that together with Bloc Poroshenko formed the coalition government – pulled out. While the government, loyal to the outgoing president, had the full intention of reforming a coalition government to slow down Zelensky’s planned reforms, Zelensky took the step of unilaterally dissolving parliament in his first act as president, mere minutes after taking office. The move gives him a golden opportunity to ride high on his popularity and seek a friendly legislature and victory for his party, Servant of the People, bearing the same name as his comedy show. There are doubts as to the legality of that move, however, as the withdrawal of People’s Front from the coalition may mean that creating a new coalition government may take legal precedence, and dissolving parliament would therefore need to wait up to thirty days. Nevertheless, Zelensky is clearly determined to have a legislature that will cooperate with his agenda and provide the domestic political strength necessary to confront Russia. The only question is when the parliamentary election will take place.

Ultimately, what this all means for Ukraine is unclear. There is hope throughout Ukraine for a brighter future, but Zelensky comes into office with far more questions than answers, and lacking any political, executive, military, or business experience. He is the anti-corruption president, potentially tied to a corrupt oligarch. He is the negotiator who may find no one to negotiate with. But he carries on his shoulders the hopes and dreams of millions of Ukrainians seeking a new and better future for their nation, and together with a fresh parliament, this comedian could be the fresh start required to make that vision come true.

But unless the incredible happens, the comedian may find himself the butt of the joke.

Eamon Driscoll is a graduate of the University of Ilinois and postgraduate of Geopolitics, Territory and Security at King’s College, London. Eamon focuses on issues in Russia and the wider Commonwealth of Independent States, which has furnished him with extensive experience on the topic of breakaway states. His current academic focus is on the Russian enclave of Kaliningrad and how its unique position has forced the region to develop differently from other Russian territories, especially in the shadow of the ongoing crisis in Ukraine.