French forces deployed to North Africa’s Sahel region as part of Opération Barkhane have been escalating their operational tempo ahead of the July elections in Mali, while concurrently the G5 du Sahel coalition of local nations has secured €414 million in funding. Despite this apparently concerted international effort, jihadiism in the region is still growing, and cracks may be showing in the coalition already. In this piece, Lewis Tallon examines the threats facing the Sahel region, and how those threats could lead to the emergence of a new jihadi caliphate on Europe’s doorstep.

On March 2nd, Burkina Faso’s capital of Ouagadougou was shaken by two rapid-fire coordinated attacks, highlighting the continuing threat posed by jihadi groups throughout the Sahel region despite major international efforts. In the first attack, a small team of militants opened fire on guards protecting the city’s French embassy, and shortly after, a vehicle-borne improvised explosive device rammed the gates of headquarters of the Etat-Major Général des Armées Du Burkina Faso (General Staff of the Armed Forces of Burkina Faso). A separate team of attackers entered the compound through the breach and opened fire, apparently targeting a meeting of the leaders of the G5 du Sahel forces that was taking place inside. This type of tactic is extremely similar to the mid-February attack al Shabaab militants in Mogadishu, suggesting that if some Islamist groups are not directly cooperating, they are at least learning from one another. Eight local soldiers were killed in the ensuing firefight, all attackers were neutralised, and in total 80 casualties were inflicted on one of the region’s poorest cities. The al Qaeda-linked group Jamaat Nasr al Islam wal Muslimin (JNIM) has now claimed responsibility for the attack, stating that it was a direct retaliation for the mid-February raid by French troops on an allied Ansar Dine camp in Mali that killed key jihadi leader Malick ag Wanasnat. 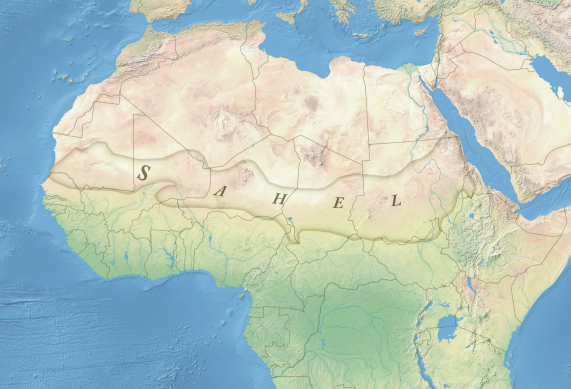 Fig 1.0 – The Sahel region in relation to northern Africa

Armed jihadi groups have been active in the region for close to thirty years now, but the problem grabbed international attention in 2012 when al Qaeda of the Islamic Maghreb, the Movement of Oneness and Jihad in West Africa, and Ansar Dine overran northern Mali in an attempt to create a Tuareg homeland known as Azawad, prompting the deployment of French stabilisation forces as part of Opération Serval. The region’s insecurity was further highlighted by the In Amenas gas facility attack in Algeria in early 2013, perpetrated by the al Mourabitoun jihadist group under the command of the enigmatic Moktar Belmoktar. In 2016, JNIM formed a coalition between several of the region’s jihadi groups in an effort to coordinate and align their activities.

French forces deployed to the region as part of Opération Barkhane (the successor to Opération Serval) have been escalating operational tempo in Mali ahead of the upcoming July 2018 elections, where President Ibrahim Keita is seeking a second term. The 4,000-strong French deployment to Mali compliments the existing G5 du Sahel military coalition, which is tasked with enforcing security in the region with backing from Europe, the Gulf Coalition Council, Turkey and the United States. In late February, the group announced that it had raised €414m funding with assistance from its international backers, allowing an expansion of operations for the 5,000-strong force made up of troops from Burkina Faso, Chad, Mali, Mauritania, and Niger. France has also pledged a total of €1.2 billion over the next five years towards regional development and assistance to the embattled local governments. The United Nations also has a 12,000-strong force in Mali under the MINUSMA deployment, and while this is ostensibly a peacekeeping mission, it has taken heavy casualties; four peacekeepers were killed in a mine blast in the centre of the country in late February. United States military forces have also been quietly deployed in the region, with the controversial deaths of four special forces soldiers in Niger in late 2017 having highlighted the largely unnoticed conflict.

Fig 3.0 – The G5 du Sahel, notably missing Algeria and either of the rival Libyan governments

Despite significant progress in the Sahel conflict in terms of finances and international cooperation, the strategic situation on the ground remains shaky. Insecurity and sporadic attacks by regional militants continue to plague the entire Sahel belt. Compounding the problem is that of local refugee movements, where military operations such as the joint Mali-Burkina Faso Operation Pagnali have led to refugees being forced into insecure areas of Mali such as the Tombouctou region of Gossi, which is already under extreme strain from the converged threats of food scarcity, banditry, and inter-communal conflict.

The loose alignment of iihadi groups have been able to present themselves as protecting mistreated communities, especially amongst the regions Fula communities, from French/G5 du Sahel-aligned militia groups.

In other areas, such as along the porous and highly insecure Mali-Niger frontier, repeated attacks against French forces by the JNIM coalition have prompted major counter-offensives combining French forces with militia groups aligned loosely with the Malian  and Nigerien government, often including groups accused of themselves contributing to local inter-ethnic conflicts. While French and G5 du Sahel reports claim that these operations, combined with a series of strike missions against senior JNIM figures such as Malick ag Wanasnat, have been largely successful at disrupting jihadi operations in the theatre, jihadist recruitment continues, fueled largely by inter-communal tensions created by the employment of controversial pro-government militia groups, poor local economic prospects and sparse access to government services. The loose alignment of iihadi groups have been able to present themselves as protecting mistreated communities, especially amongst the region’s Fula and Tuareg communities.

Given the nimble nature of the Sahel’s militant groups – who are able to move among local nomadic peoples and cross large tracts of desert thanks to locally-sourced supplies – the unwieldy G5 du Sahel force will need to mature if it is able to outmanoeuvre them on the battlefield.

Compounding the issue even further are the vast array of problems plaguing the G5 du Sahel forces on the ground. From logistical constraints through to disputes over operational jurisdictions, the force still requires significant reform in order to mount an effective counterinsurgency campaign. The group has also failed to win support from the Algerian government, one of the region’s more influential powers, or either of the two rival governments in Libya, which has long served as a source of the region’s jihadi armaments. Following the ouster of the Gadhafi regime in 2011, enormous stocks of Libyan weapons were looted from regime arsenals before dispersing across the Sahel through the vast trading caravan networks of the Tuareg and other regional groups. This extensive network, long used for the smuggling of other forms of contraband, allowed jihadi groups across Africa to purchase modern weaponry and in some cases, gain the upper hand against local security forces. Given the nimble nature of the Sahel’s militant groups – who are able to move among these nomadic tribes and cross large tracts of desert thanks to locally-sourced supplies – the unwieldy G5 du Sahel force will need to mature if it is able to outmanoeuvre and outmatch them on the battlefield.

On March 6th, Al Qaeda‘s elusive leader Ayman al Zawahiri praised the “resistance of Muslims” in the region to the “French invaders” and called for the continuation and escalation of jihadi activities in the Sahel. Further attacks from JNIM, AAD and other jihadist groups are likely to follow al Zawahiri’s message, and the message itself follows the latest Foundation for Defence of Democracies report, issued in late February, highlighting the growing trend of jihadi activity targeting international – particularly “Western” – interests across Africa. The report noted that groups operating in the Sahel, West Africa and the Horn of Africa have increased their operational tempo; between 2007 and 2011, there were 132 attacks against Western interests in Africa, but this number tripled to 358 attacks between 2012 and 2017.

Failure to act and over-reliance on the highly-strained and fledgling G5 du Sahel could lead to the creation of a new jihadi stronghold in the heart of northern Africa and on Europe’s doorstep.

In addition to the growing al Qaeda presence in the Sahel, the Islamic State is becoming increasingly more active in the region. While Nigeria’s Boko Haram has already pledged allegiance to the Caliphate, loyalties are increasingly shifting amongst the region’s smaller jihadi groups. Regional governments have been increasingly warning of the threat posed by Islamic State fighters entering the theatre as Libya’s Caliphate-held territories shrink, and as the group faces strategic defeat in the Levant region, the Sahel may provide the poorly-governed space needed to make a second attempt at rebuilding the State.

To counter this threat, the international community, G5 du Sahel and neighbouring actors such as the governments of Algeria and Libya must be willing to engage in the Sahel both in terms of security operations and stabilisation missions through economic, education, health and governance programmes. Failure to act, combined with over-reliance on the highly-strained and fledgling G5 du Sahel could lead to the creation of a new jihadi stronghold in the heart of northern Africa and on Europe’s doorstep.

Suggested books for additional reading on this topic: