Turkey’s military forces continue to push south into Syria’s Kurdish enclave. With the complex and challenging battle for the city of Afrin looming, President Erdoğan insists that the operation will push on. Turkey launched the operation (code named “Olive Branch”) into the Afrin canton in January in pursuit of US-backed Kurdish militias which it labels “terrorists”, however Ankara must now assess its options. Is denying an armed Kurdish zone of control along its border worth the price of challenging Damascus’ little remaining territorial sovereignty, upsetting its NATO allies and potentially risking a confrontation with Russia? In this piece, we examine the risks of Turkey’s incursion into Syria.

When Turkish President Recep Tayyip Erdoğan’s forces crossed the southern border into Syria they seemed to take everyone by surprise; everyone except the Kurds. For them the writing has been on the wall since they inadvertently found themselves benefiting from the implosion of the Syrian state, which allowed the creation of a flourishing proxy state in North Syria. Erdoğan cannot allow a functioning, semi-autonomous state of Kurds on his Southern border after the Turks have spent blood and treasure (over 40 years and 10,000 lives) fighting the Partiya Karkerên Kurdistanê (PKK) on home turf. The Kurds have long known Erdoğan’s likely position on this, and the swift crushing of the spark of independence that their Iraqi Kurd neighbours showed last September was prophetic of their fate in Syria. For the Turkish Armed Forces, it has been relatively simple to seize the Afrin canton, but now, as the West has discovered to its cost in Iraq and Afghanistan, it is far more difficult to extricate itself.

It is an easy – even lazy – comparison to draw between our Middle Eastern forays and the Turkish invasion of Afrin. The Turks are not there yet, but the seeds have been sown. The Kurdish Yekîneyên Parastina Gel (YPG) militia are now fighting on their home territory, they are excellent at guerrilla tactics, they are heavily armed with myriad weaponry donated for the fight against the Islamic State by various developed nations, and they enjoy huge local support. The Turks in contrast have so far lost a significant number of Leopard tanks, their air cover is contingent upon Russia and the Syrian Regime restraining themselves from knocking it out of the sky, and their forces are struggling to fight a counter-insurgency in unfamiliar territory. Now they have reached a crucial stage: the encirclement of Afrin city.

Urban clearance operations are inherently vicious, bloody, and resource intensive. Your options are simple: Clear the city street by street, or destroy it. The latter option is ruled out for the Turks given the already shaky support they have from the international community for the Afrin operation. Photographs of leveled apartment blocks and bloodied children will not aid their protestations of a legitimate intervention. Clearing the city of Afrin will take considerable time and casualties. This is something Turkey can ill-afford. Similarly, Erdoğan may control the domestic press but he is already paranoid given the 2016 abortive coup against him that he must fear an unpopular war’s effect on his people and therefore his own position. Erdoğan could continue to use the essentially disposable soldiers of the Free Syrian Army, but this risks the implications of a militia fighting on behalf of a state. They are more difficult to control and will not win him any more international support. They also have their own agenda; this currently aligns with Erdoğan’s but perhaps not for long. 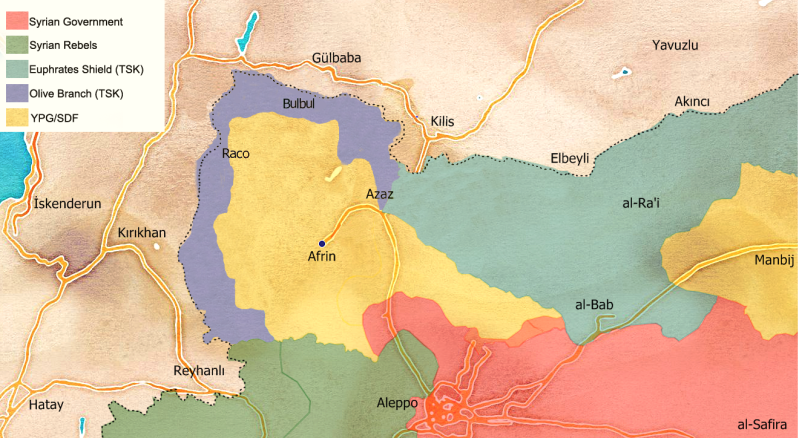 The international community has so far barely supported the intervention, if Erdoğan overplays his hand then it will derail any medium-term chance of Turkey joining the European Union. Though his recent rhetoric in the Turkish press against EU criticism against him hints that he may not value this particular carrot anymore, international perception still has an impact on Ankara.

Another interesting factor is that Turkey currently shelters 3.5 million Syrian refugees. A full scale conflict with the Syrian Regime will result in them having to make a choice of who to side with, and 3.5 million angry, predominantly young male Syrians is a daunting prospect to contend with in your own territory.

Therefore, Erdoğan needs to make a decison; push the offensive or withdraw. As stated above, he controls the Turkish media narrative. He can return his forces to Turkish sovereign territory and cry “Mission Accomplished” to his people. The other option risks a new front in the Syrian civil war, this time conceivably state on state as Assad asserts Syria’s borders. The Kurds, meanwhile, face their own dilemma; fight Turkey and risk heavy losses of personnel and territory, or get into bed with Assad and exchange potential independence for likely semi-autonomy as a Satrapy of Damascus.

Erdoğan risks fanning the flames of an already dire situation in Syria. East Ghouta and the Middle Euphrates River Valley is finished in practical terms for the Syrian Regime. Now Assad can afford to take stock and reassert his sovereign border integrity. If Turkey can divorce emotion from the situation they could withdraw their forces in parallel with a Syrian Regime advance. This scenario allows the Turks to remove armed Kurds from their southern border, a not unreasonable request given the emotive conflict they have fought against the PKK and the muddied relationship they share with the YPG. It also allows the Kurds to be semi-autonomous under the auspices of the Syrian state, which is likely given the lack of relevance that Afrin has for the Regime in the long term. Finally in terms of the Regime, they re-impose authority over their land and continue the process of normalisation and the creation of an uneasy peace in Syria.

Erdoğan, the YPG, Assad, and the International community are now at a crossroads. They can each choose to show a level of humility and row back from the brink, or we are about to enter yet another phase in the Syrian civil war. One that may drag in even more third parties and pit the NATO nation of Turkey against Syria and Russia with the YPG.

Archie Hicox is the pen name of a serving British Army officer with an academic background in current affairs and international relations. He has deployed throughout the world on multiple operations, most of which are spent in mentoring roles with local forces. He is particularly passionate about Middle Eastern geopolitical affairs.