Geopolitically, the United Arab Emirates (UAE) is something of an enigma. The small nation situated on the Arabian Gulf most commonly known for dramatically ambitious skyscraper and island-building prestige projects also maintains a disproportionately ambitious foreign policy stance. A confluence of a comfortable treasury to population ratio – the result of cleverly-managed hydrocarbons wealth – and a strategic position for shipping, finance and air transit has benefited the UAE significantly. Playing host to U.S., British and Australian military bases has also endeared Western nations towards the Gulf State, which has been further leveraged by major purchases of advanced military hardware from the West. When combined with a population that, while not ethnically homogeneous, is bound more tightly by a sense of national identity than most other regional peoples, the UAE is able to act more assertively on the regional stage than most nations of a similar size.

While it is often suggested that the UAE’s military excursions are simply part of a geopolitical vanity project, the reality is more nuanced. In some cases, the motivations are clear; Abu Dhabi’s recent efforts to increase the UAE Armed Forces’ deployment to Afghanistan as part of the dwindling U.S.-led Security Assistance mission appear to be little more than a bid for President Trump’s affections through a gentle reminder of the nation’s affectionate Pentagon nickname of “Little Sparta“. Others, such as the deployment of the UAE Air Force against the Islamic State in the Levant are more complex but still clear, driven by a desire to gain international good will in the fight against extremism, the fear of organised jihadists shared by all Gulf monarchies, and the desire to prove the capabilities of their cutting-edge Western-built Air Force in the face of a resurgent Iranian threat to their north.

More complex are the UAE’s operations in Yemen and the Horn of Africa. Yemen is the more clear cut of the two: Abu Dhabi is keen to avoid the creation of a failed state on the Arabian Peninsula and the expanded Iranian influence that would bring. Particularly, the Emirati government seeks to keep the Houthi movement’s domestically-produced Burqan-series missiles out of range of Abu Dhabi and other population centres. In addition to this, the UAE is keen to see investments into the port infrastructure in Aden protected, while also expanding its own dominance of the shipping sector around the Peninsula.

The UAE’s build up in the Horn of Africa is more complex still, as Abu Dhabi is seeking to achieve multiple objectives by leveraging its military bases in Eritrea, the Somalian  state of Puntland, and breakaway Somali state and former British protectorate of Somaliland to create a stable strategic redoubt, while simultaneously maintaining influence over the critically important Bab el Mandab strait.

Before moving on to the Horn of Africa, it is also worth examining the UAE’s strategic position on the equally vital Hormuz strait. Strangely, Oman controls a small detached territory north of the UAE known as the Musandam – which forms the northernmost tip of the eastern Arabian Peninsula – due to the tribal-influenced complexities of post-Trucial states border mapping (see Figure 2.0). Despite this strategic position, Oman’s relatively small presence here (combined with Muscat’s staunch regional neutrality) is overshadowed by the UAE’s ability to exert influence on the Hormuz strait from its northernmost Emirate, Ras al Kheimeh (literally meaning “tip of the tent”). It should also be noted that, despite being claimed by the UAE, the Tunb islands have been irrelevant to their geostrategic position in the Hormuz Strait since their seizure by Iranian military forces in 1971. Despite the loss of the Tunbs, between Ras al Kheimeh and the Horn of Africa the UAE is in a position to exert influence over two of the most important shipping lanes in the Middle East, and by extension the world.

Fig 2.0 – The complex borders of the Northern Emirates and Oman

Beyond exerting influence over the key strategic geography of the region, the UAE also sees its foreign bases as something of an insurance policy against more existential threats to the nation. With the exception of the inland oasis city of Al Ain (part of the Emirate of Abu Dhabi) and the smaller cities along the Indian Ocean coast, the UAE’s major economic centres and the bulk of its population are concentrated along the Gulf coast in the Emirates of Abu Dhabi, Dubai and to a lesser extent Sharjah, Ajman, Umm al Queim and Ras al Kheimeh. The UAE’s government is all too aware that these economic centres (especially their water desalination and power generation infrastructure) would be extremely vulnerable to missile and seaborne attack in the event of war between Iran and the Gulf powers, who remain in a state of cold war. While the UAE has invested heavily in advanced missile defence equipment – even going so far as to controversially court Israel for access to Iron Dome technology – and maintains one of the region’s most effective air forces (especially compared to the ancient and almost strategically-irrelevant Iranian air force), Iran’s missile assets could potentially overwhelm the UAE in the event of war.

While Abu Dhabi maintains military bases deep inland at the northernmost edge of the Empty Quarter, the small geographic size of the UAE still leaves its entire territory well within striking distance of Iran, and leaves little strategic depth in the event of conflict along the littoral. Its military bases in Assab (Eritrea), Berbera (Somaliland) and Bosaso (Puntland) provide Abu Dhabi a level of warfighting depth that it could not achieve within its own borders, essentially providing a reserve component that could be deployed back towards the UAE and across the Gulf in the event of major strikes against domestically-based forces. 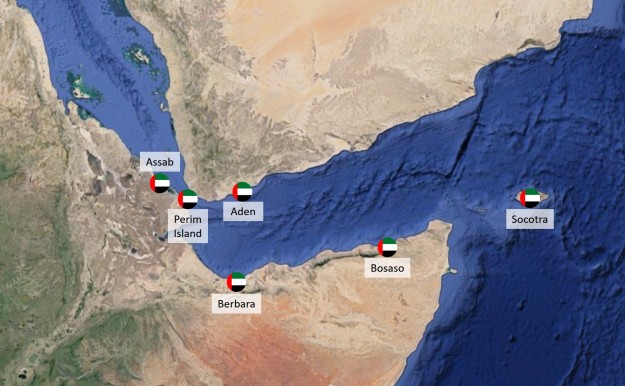 These deployments are made possible by the useful confluence of investment opportunity in the Horn of Africa for the UAE’s civilian shipping industry through entities such as Dubai Ports World, and receptive client governments (or breakaway governments in the case of Somaliland) who are open to UAE courtship, financing, military training and support in exchange for basing rights. The UAE also maintained a military presence in Djibouti from some time following their 2008 leasing of the Doraleh Container Port, however this ended abruptly with the cessation of diplomatic relations between the two states in 2015 after an Emirati military aircraft landed at Djibouti’s International Airport without authorisation (amongst other disputes with the Djibouti military). Abu Dhabi has also established military outposts on Yemen’s Socotra and Perim islands, including the construction of a military airstrip on the latter. Although these outposts appear to be more focused on the Yemen conflict and military training activities for the time being, they may prove useful assets in future given their highly strategic positions at each end of the Gulf of Aden.

While a prestige-focused desire to punch far above its weight geopolitically and a desire to impress the Pentagon with a cooperative military spirit cannot be entirely ruled out when examining the UAE’s overseas endeavours, there are elements of sound geopolitical strategy in their investments and deployments across the wider region. Whatever the motives, “Little Sparta’s” foreign policy posture has clearly undergone a major shift since Sheikh Zayed Al Nahayan – the nation’s founder – spoke the words, “Be obedient to Allah and use your intelligence instead of resorting to arms”.