The United States has once again, along with its international allies, launched military strikes against the Assad regime in Syria. The conflict is becoming increasingly congested and the risk of miscalculation and escalation are significant. In this piece, U.S. Navy Officer Anthony Clay examines a potential route to a wider conflict through Syria.

One year after surprise American strikes, bombs and missiles were once again raining down again in Syria. This time, there was much less surprise to those watching, with President Donald Trump telegraphing his intent to strike via Twitter. The surprise came in the limited scope of the strike. The relatively restrained attack, focused on extremely narrow targets associated with the production, distribution and use of chemical weapons, were more of a knuckle rapping than the spanking that was expected.

Independent of any perceived ties between the U.S. President and Vladimir Putin, the number of separate players, the myriad objectives, and the odd collection of alliances make the concept of mutually beneficial military objectives an impossibility and make the odds of an effective campaign to bring about regime change in Syria close to nil.

To better understand how we got here, we can reach back to the early days of the conflict; as the U.S.-led war in Iraq was moving further into chaos, the Al Qaeda affiliates in the north west of Iraq started to coalesce into a new separatist group. This group, eventually known as the Islamic State (IS), spread into large swaths of Syria – itself undergoing its own civil war – and branching momentarily across the border with Turkey, which was also in a sectarian battle with the ethnic Kurds in the east.

The alliances here are confusing, so let’s break them down. The fight against IS is the main factor bringing a large number of countries to this strange coalition. The U.S. plays a large part, with continual airstrikes and ground forces within Syrian borders. There is active support from European nations such as the United Kingdom, France and Germany. There is also support coming from Turkey, Israel, Russia, the Kurds, and the government of Syria. The U.S. has close alliances with the Europeans, Turkey, Israel, the Kurds, and has tentative-but-still-cold cooperation from Russia and Syria in its operations specifically targeting IS. Russia has provided a steady influx of forces, and have used the theater as a proving ground by conducting the first operational engagements of new aircraft, missiles, and other weaponry. They are ostensibly conducting the bulk of their strikes on IS targets, but frequently have been striking the more moderate rebel forces – often those backed by Western powers – opposing Assad. 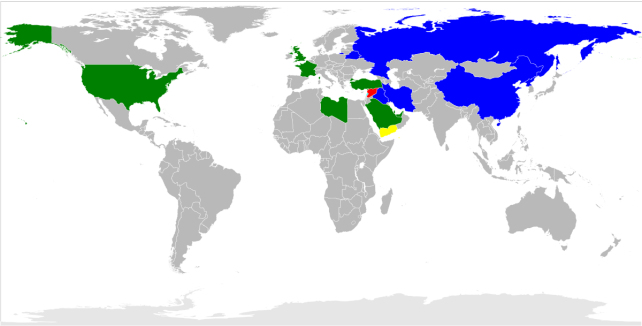 Last year Turkey was in a highly adversarial position with Russia. They were strictly enforcing a no-fly zone when a Turkish fighter downed a Russian SU-24. The two countries lodged a very heated war of words before the two strongman heads of state came to a cooperative agreement and have worked ever closely since then. The Turks are in a years long skirmish with Kurdish groups seeking to establish their own independent state encompassing parts of Iraq, Syria and Turkey.

In a demonstration of the risks posed by this internationally-congested operational theater, several weeks ago at Al Tabiyeh there was an attempted attack on a U.S. position, with support from Russian “mercenaries”. The U.S. garrison responded with artillery and air assets, and stopped the assault before the American position was in danger. The subsequent deaths were the largest number of Russian deaths at the hands of the U.S. military since the Cold War. Additionally, these mercenaries were supposedly given the go-ahead to conduct the raid directly from the Kremlin. The U.S. has also been in active engagements with Assad’s forces, even shooting down one of his ancient MiGs.

The air strikes following the Douma chemical attacks were a joint effort between the U.S., UK, and France. The limited engagement was theoretically meant to avoid further escalation and the risk of drawing Russia and Iran into direct confrontation with the western forces, primarily American. If a strike by the U.S. were to be considered too severe on Assad’s forces, there would likely be retaliation from Russia. The tension between the U.S. and Russia within Syria is already close to boiling over, but this could precipitate the first major conflict between these two powers directly. The already present tension and congested operational space in the Black Sea and Eastern Mediterranean could erupt into firefights, and even spill over to other theaters as far away as the Western Pacific (which has been remarkably calm given the activity elsewhere).

The other primary benefactor to Assad, Iran, would also likely react. This could mean an out of area response, and with the large number of American forces in the Persian Gulf, it could lead to direct confrontation between naval and air forces in the waterway, bringing a massive impact on oil shipments out of the Gulf. This would also entangle the other U.S. allies in the region. Saudi Arabia is currently in their own fight against the Iranian-supported Houthi movement in Yemen, and this could place increased impetus on Iran to expand this support with a direct assault on Riyadh. Bahrain, Qatar (currently embroiled in a separate-yet-related dispute with the other Arabian powers), and the United Arab Emirates all play host to U.S. forces and are heavily reliant on trade through the Strait of Hormuz. They could find themselves dragged into the conflict, and the Persian Gulf would erupt, possibly causing destabilization as far away as the Horn of Africa.

Turkey has a longstanding alliance with the U.S. and is a NATO member state, but with their recent cooperation with Russia against the Kurds – another U.S. ally – and their declining relationship with the U.S., their dependability in this conflict would be questionable. Instead they would likely use the opportunity to further escalate the war against the Kurds.

The other Eastern Mediterranean states would likely get dragged in as well. Jordan and Lebanon would likely side with the U.S.’s efforts, as they are currently aligned with the U.S. in the anti-IS fight. Israel is a staunch U.S. ally and largely anti-Assad, and has reportedly conducted air strikes targeting Iranian forces in Syria. This relationship would likely continue and expand the role of Israel in being a partner to the Gulf-Arab states. Iraq has played host to U.S. forces attacking IS, but beyond this support, they would be an unlikely provider of significant military support given their ever-growing ties with Iran.

How does this wrap up? With the many convoluted alliances, partnerships, working relationships, rivalries, and the involvement of outside powers, the scene is set for this to be the conflagration that kicks off the largest round of fighting in 80 years. The odds that this will be the case remain most probably low. There will almost certainly be miscalculations and small skirmishes along the lines of what we have seen over the last few years. There is little appetite for a major war from the western powers, still reeling from the 15 years in Afghanistan and Iraq. The idea of creating another power vacuum in Syria after deposing the Assad family, especially while there is still an active IS presence, is not palatable and has provided a huge disincentive for strikes to kill Bashar al Assad himself. So the odds of Word War III starting here are low, but they also aren’t zero.

Anthony Clay is a Surface Warfare Officer in the United States Navy who has served in every operational fleet, and most geographic Combatant Commands. He has an International Relations Degree from Tulane University and a Operations Research Masters Degree from the Naval Postgraduate School. Anthony is currently assigned to a staff posting within a numbered fleet.